A Rare Gem in the UK

So, as some of you know, today was a massive day for me. I managed to finally get some hands-on with a wolf and two wolf-dogs. This was only arranged thanks to an absolutely amazing rescue, who took these animals on when many wouldn’t. I was fully expecting to be meeting these creatures through a lot of safety procedures…

But it was this lad, Rain, who came out to see me first.

He is massive! I mean…truly huge. 8 stone (52kg/115lbs) in weight and taller than I was. His paws? Larger than my own hands. And yet, he had the sweetest personality. I wasn’t just able to stroke this handsome, handsome lad…I was allowed to walk him too! He wasn’t as much of a puller as I was expecting, less so than my malamute! However…he did pull when we reached the field I was walking him through.. 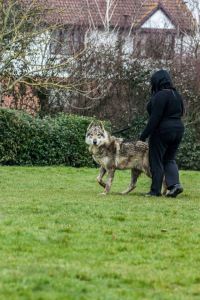 Wonder what he saw here? Could it be the camera? Or the idea to pull me about…? 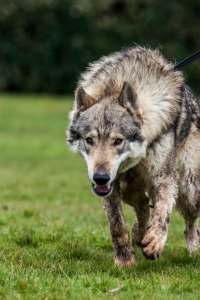 He was just a LITTLE bit dirty, but this was him pulling me along the grass…so glad my shoes had grips! It was astounding to see the size and the movements of a wolf like him, especially since he was a friendly, gentle creature…

You can see the size of his paws here…and those AWESOME eyes. A mixture of burnt amber and orange, they were absolutely piercing…and 1000000% better than I believed they could be.

Apparently, I hadn’t let him say hello quick enough…so before I knew it, he was in my face…and I couldn’t get my arms around him! He was kissing me for ages…and yes, I nearly fell over! He’s a massive beast, as you can see…but I loved him…loved everything about him.

I also got to meet Miska – she’s a very, very timid wolf-dog, who still managed to leap up and push her face into mine (a bit nerving because…she’s timid and stalks people) but she was absolutely gorgeous…a lot smaller than Rain…(This is me holding Miska!) 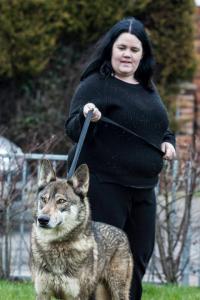 She’s red wolf x, just a little over a year and a VERY skittish girl. I loved her. She had the most awesome eyes, and the most odd stalking gait I’ve seen. Her ears are HUGE compared to the rest of her, as seen by the difference in size between her and Rain against me. 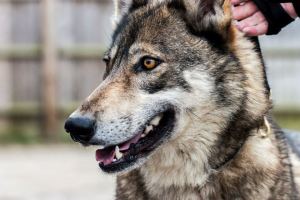 This is a close-up on Miska’s eyes – can see the difference in her head structure/facial shape to Rain. She’s glorious!

And finally…I met Soli. Soli was the oldest wolf-dog, at 9 years old, and his hips are starting to go. He’s sweet, too! A little age-tattered but that is only the fact that he is poorly bred. He was just as lovely as Rain! 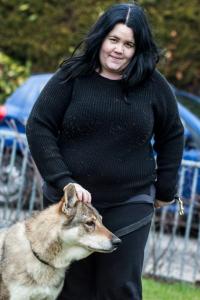 These wonderful creatures, and many others, are looked after by Artisan Rarebreeds – truly a rescuing gem in the UK. I’d recommend anyone who can afford to to donate money/items/buy stuff off of his wishlist!

I want to thank Wayne, who runs the rescue for today. Being able to meet them all is absolutely amazing! I’ve never, ever been as happy as I am today. It’s given me a reason for the writing I do, and an idea of someone to thank, and something to add into every book I write with my wolves in – that wolves are to be treasured, and places like Artisan, who take in waifs and strays, are in need of publicity to make sure they get what they truly deserve!